How to interact with or have interactions between several StatefulWidgets?

Sometimes, it is necessary to get access to a StatefulWidget from another Widget to perform some operations or to link two or more StatefulWidgets to realize some business logic.

As an example, suppose that you have a 2-state button, which is either ‘on’ or ‘off’. This is easy to do.

However, if you now consider a series of such buttons where your business rule says: “only one of these buttons may be ‘on’ at a time". How do you achieve this? More complicated, imagine the case where these buttons would be part of different widget trees…

Let’s first write the basic code of a 2-state button. The code could look like the following:

The following code: “widget.onChange?.call(_isOn);” is equivalent to

Let’s now create a page that contains 2 of these buttons. The code could look like the following:

We obtain the following screen: 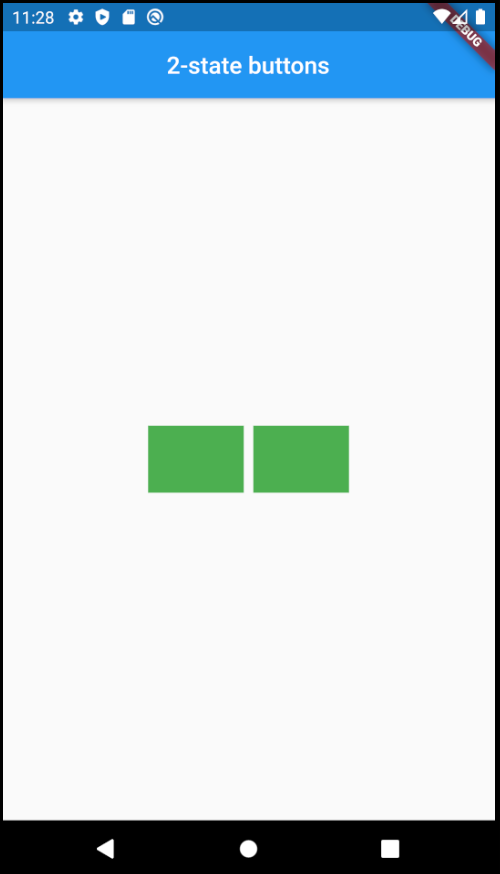 When the user taps on one of the buttons, the corresponding one’s color toggles.

How to create a relationship between the 2 buttons?

Let’s now assume that we need to have the following behavior: “when one button is ‘on’, the other is ‘off’". How could we achieve this?

At first thoughts, we could update the code of the page as follows:


However, despite this modification which seems logical, it does not work… why?

The problem comes from the ButtonTwoStates button which is a StatefulWidget.

If you refer to my past article on the notion of Widget - State - Context, you will remember that:

So why doesn’t it work?

Simply because, by simply passing a “new value” to the ButtonState.isOn, its corresponding State will not change as the initState method will not be called a second time.

How can we solve this?

Still referring to my past article (Widget - State - Context), I did only mention one overriddable method: didUpdateWidget without explaining it…

This method is invoked when the parent Widget rebuilds and provides different arguments to this Widget (of course, this Widget needs to keep the same Key and runtimeType).

In this case, Flutter calls the didUpdateWidget(oldWidget) method, providing the old Widget in argument.

…and this is exactly what we need as:

Let’s apply the necessary modification to our _ButtonTwoStatesState source code as follows:


Thanks to line #17, the internal value “_isOn” is now updated and the button will be rebuilt using this new value.

OK, now it works, however, the whole business logic related to the buttons is taken on board by the TestPage, which works great with 2 buttons but if you now need to consider additional buttons, it might become a nightmare moreover if the buttons are not direct children of the very same parent!

The GlobalKey class generates a unique key across the entire application. But the main interest of using a GlobalKey in the context of this article is that

The GlobalKey provides an access to the State of a StatefulWidget, using the currentState getter.

So, what does this mean?

Let’s first apply a change to the original source code of the ButtonTwoStates to make its State public. This is very easy: we simply remove the “_” sign from the name of the class “_ButtonTwoStatesState". This makes the class public. We then obtain:

Now, let’s use the GlobalKey inside our TestPage …

So, the change to be applied to the ButtonTwoStatesState code is limited to adding a new method as follows:

As we can see, this solution also works however, here again, the whole business logic related to the buttons is taken on board by the TestPage…

Another solution: a Controller

Another solution would consist in using a Controller class. In other words, this class would be used to control the logic and the buttons.

Here is a very basic implementation of such possible controller:

I hope that the code is self-explanatory:

Let’s have a look at the modifications to be applied to both TestPage and to ButtonTwoStatesState:

The TestPage simply initializes the ButtonTwoStatesController, mentions the number of buttons to consider, which one is selected and a callback method to be invoked when the button selection changes.

This controller is passed in arguments to each button (lines 22 & 27).

This solution is already much better as the business logic related to the buttons has been externalized to the controller (even for the buttons themselves).

It is also much easier to add a button to the page.

Even if this solution works, this is, however, still not ideal as in a real application, buttons will most probably not all be inserted into the Widget tree by the same parent.

In order to solve this issue, let’s make the controller available to any Widgets, part of the TestPage. To do this, let’s use a Provider.

Let’s look at the changes to apply:

As we can see, the Page may now become a StatelessWidget and we do not need to pass the controller to each button.

Now, it is up to the button to retrieve the controller, via a call to the Provider (line 20).

Advantages of this solution:

It is much better, however, we are exposing the ButtonTwoStatesState of the buttons to the outside world… isn’t there any other solution?

Another approach would be to let the buttons react upon any changes. This could be achieved in different ways. Let’s have a look at some of them…

Yes, I know… again the notion of BLoC and… why not? (this time I will use the Provider, to change a bit).

If you remember my articles on the topic (see here and here), we are using Streams.

The code of such BLoC could look like the following:

As you can see, at initialization time:

As regards the TestPage, we simply initialize and inject the ButtonTwoStatesControllerBloc.

And finally, for the buttons:

This solution also works but all buttons are systematically rebuilt… which has impacts on the performance.

To limit the number of rebuilds, we could adapt the BLoC to only emit events related to changes (on => off, off => on) but we would then need to link the new state to the button index.

Of course, this has a price…

…but it is not difficult to do. This is a trade-off to do.

We could also use a ValueNotifier together with a ValueListenableBuilder.

A ValueNotifier listens to variations of an internal value. When a variation happens, it notifies everything that is listening to it. It implements a ValueListenable.

A ValueListenableBuilder is a Widget which listens to notifications emitted by a ValueListenable, and rebuilds providing the emitted value to its builder method.

The solution, based on these 2 notions, consists of buttons, registering themselves to a controller, which would tell each button which ValueNotifier to listen to.

Such a solution could be written as follows:

This code is very similar to our version of the first controller, earlier in the article.

The interesting parts are:

As regards the TestPage, we only inject the new controller, as follows:

The code related to the button has to be changed as follows:

That’s it. This solution also works.

When we start developing in Flutter, the notion of StatefulWidget is not that easy to master, and when comes the moment to apply rules between multiple instances, it is very common to wonder how to make things done.

This article tries to give some hints through the basic example of 2-state buttons.

Dozens of other solutions exist and there is NO one single and best approach. This highly depends on your use case.

I hope that this article at least gives you some insight on this topic.

Stay tuned for new articles and as usual, I wish you happy coding!