BLoC, Scoped Model, Redux… Comparison… when to use them and why?

Many questions frequently asked on this topic and so many answers can be found on the Internet but is there any right choice?

In order to provide my own analysis, I have considered 2 distinct types of use-cases, built a quick solution to cover these use-cases using the 3 frameworks and compared them.

The full source code that covers Redux, ScopedModel and BLoC solutions can be found on GitHub.

In order to better understand the differences, I think it might be useful to quickly remind their main principles.

Redux is an Application State Management framework. In other words, its main objective is to manage a State.

Redux is architectured around the following principles:

It is important to note that, according to Redux recommendations and good practices, there is only one single Store per application. To split the data handling logic, it is advised to use ‘reducer composition’ instead of many stores.

Redux has intially been developed for Javascript and ported to Dart as a package.

A Flutter dedicated package (flutter_redux) provides some Widgets, such as:

ScopedModel is a set of utilities to allow to pass a data Model from a parent Widget down it its descendants.

ScopedModel is articulated around 3 classes: 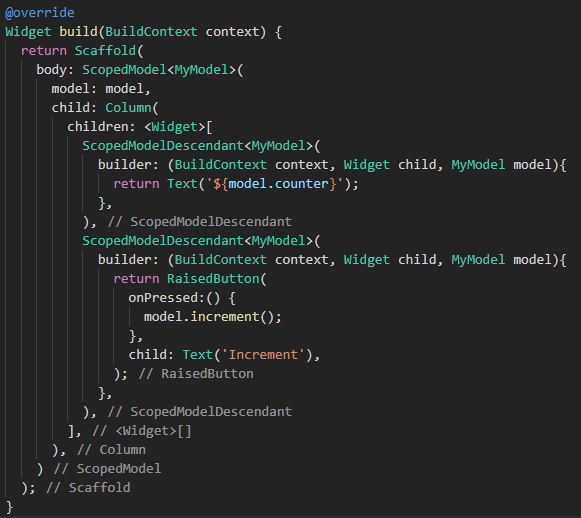 The following animation shows what happens when the user taps on the Button.

The BLoC pattern does not require any external library or package as it simply relies on the use of the Streams. However, for more friendly features (e.g. Subject), it is very often combined with the RxDart package.

The BLoC pattern relies on:

The following animation shows how the BLoC works when we are injecting some data into one of its Sinks or via an API.
(I know, BLoC are only supposed to be used with Sinks and Streams… but nothing really prevents from also using an API…)

For additional information on the notion of BLoC, please refer to my 2 articles on the topic:

Now that we have a better idea of what they are and work, let’s compare them…

To do this, I will take 2 samples to illustrate their differences, advantages, and disadvantages…

This common use-case is very interesting since it involves some type of Application State. In this example, I want the page to act as follows:

The following 2 pictures show, side-by-side, the codes related to the initialization of the application and the page, respectively. 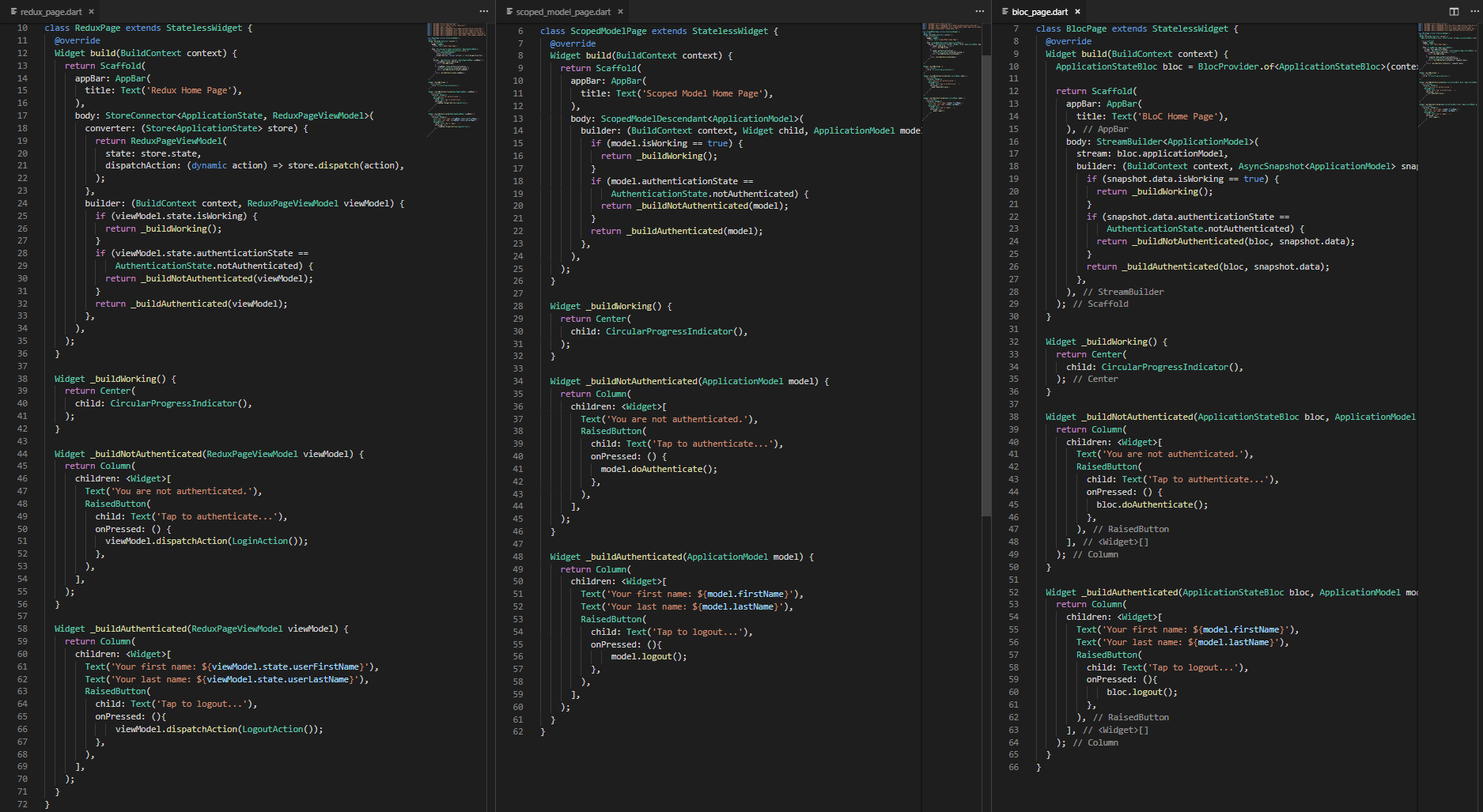 As we can see, there is not that much difference.

This absence of big difference might be the result of the architectural decision I made, as I took as a requirement that we could need to able to “log out” from anywhere in the application. Therefore, I needed both ScopedModel and BLoC solutions to inject their respective model and bloc on top of the MaterialApp, to be available from anywhere later on.

However, there are differences… let’s check them…

In Redux, the solution leads to many more files (if we want to stick to the “one entity, one file” paradigm). Even if we regroup the entities based on their responsibilities (e.g. put all actions together), we still have more files.

The ScopedModel solution requires fewer files as the model holds both the data and the logic.

The BLoC solution requires one additional file, compared to the ScopedModel, if we want to split both model and logic, but this is not compulsory.

In Redux, because of its way of running, we have much more code that is executed, sometimes for nothing. Indeed, the way to write a reducer is based on condition evaluations such as: “if action is … then", and the same applies to the middlewares.

Also, and maybe because of the implementation made by the flutter_redux package, a StoreConnector requires a converter, which sometimes is not necessary. This converter is meant to provide a way of producing a ViewModel.

Both ScopedModel and BLoC solutions seem to be the ones which require less code execution.

If you keep in mind that it is always an Action that triggers all middlewares to be run in sequence (up to the moment they implement something asynchronous), then the reducer which needs to do things based on a comparison on an action type, the code is relatively simple. However, very soon it will require to use the notion of reducer composition (see combineReducers with TypedReducer).

The ScopedModel solution looks like the one which leads to the simplest code: you call a method which updates the model that notifies the listeners. However, it is not obvious for the listeners to know the reason that led being notified since any modification to the model generates notifications (even if it is of no interest for that particular listener).

The BLoC solution is a bit more complex as it involves the notion of Streams.

Behind the scene, the flutter_redux solution also relies on the use of Streams, but this is hidden from a developer perspective.

If we have a look at the number of times parts of the application rebuild, it becomes interesting…

As internally, the flutter_redux uses the notion of Streams to react on changes applied to the State, if you do not try to get access to the Store via the StoreProvider.of(context) API, only the StoreConnector will rebuild (as implemented using the StreamBuilder). This makes the flutter_redux implementation interesting from a rebuild perspective.

The ScopedModel solution is the one that produces the more builds since each time a Model notifies its listeners, it rebuilds the whole tree under the ScopedModel() widget (in fact under the underlying AnimatedBuilder).

The BLoC solution, as ideally based on StreamBuilder to respond to changes is, with flutter_redux the one which causes the less builds (only the part related to StreamBuilder is rebuilt).

In Redux, reducers and middlewares are, “usually” but not necessarily, top-level functions/methods meaning not part of a class. As a consequence, nothing would prevent calling them outside the scope of the Redux Store, which would not be ideal.

Both ScopedModel and BLoC tend to prone code isolation: one specific class for the model or the bloc.

For this specific case and because there is no constraints of performance (rebuilds), I personally don’t see any benefits of opting for one or another solution.

The little advantage I would give to Redux is the ability to insert a middleware to log the different actions: you simply need to add the reference of the middleware method when initializing the Store.

For both ScopedModel and BLoC, this would require much effort.

For this case, we are going to simulate some kind of dashboard where the user may dynamically add new panels. Each panel simulates some real-time data evolution (e.g. stock exchange). The user may turn the real-time data fetching on/off for each of these panels, individually.

As I wanted to stick to the Redux main principle (one Store per application), it was harder to implement this in Redux since the ApplicationState required to remember and handle each individual Panels.

Now, if you do not want to stick to this principle, nothing actually prevents you from using multiple Stores, one per Panel. Proceeding that way, the code is a bit simpler.

As regards the ScopedModel and BLoC versions, the codes are very similar.

Here again, Redux requires more files (even if we regroup as much as possible) than for the other 2 solutions.

For this case, both ScopedModel and BLoC solutions require the same amount of files.

The very same comments as for case 1.

Redux executes much more code than both ScopedModel and BLoC solutions as the reducer is based on condition evaluations such as: “if action is … then", and the same applies to the middlewares. In addition, 3 instances of StoreConnector are necessary:

ScopedModel requires additional code execution than BLoC as ScopedModel relies on Listenable/InheritedWidget to rebuild each time the Model changes.

The solution based on ScopedModel requires, per Panel:

BLoC is the one which executes the less code. Per Panel, the solution requires:

The Redux solution is more complex as it requires the dispatching of Actions at 3 different places:

The complexity of both ScopedModel and BLoC solutions is only located at the Model and BLoC levels, respectively. As each Panel has its own Model or BLoC, the code is less complex.

The Redux solution is the one that causes the most of rebuilds.

In the implementation, based on “one Store per Application", each time a change applies to the ApplicationState, everything is rebuilt, meaning:

If I had chosen to have one Store per Panel, the number of (re-)builds would have been much lower.

As regards the ScopedModel solution, the number of rebuilds is a bit more limited:

Finally, the BLoC solution is the one that requires fewer rebuilds:

For this specific case, I personally find that the BLoC solution is the best option from both code complexity and rebuilds perspectives.

The ScopedModel solution comes next.

The Redux architecture is not optimal for this solution, but it is still possible to use it.

Before talking about any conclusions, I wanted to mention that several additional packages exist today around the notion of Redux, among which the following 2 ones might be interesting for those who still prefer Redux:

This analysis allowed me to compare 3 of the most commonly used frameworks (or any other name we can use to refer to them), in their bare form, based 2 distinct use-cases.

These 3 frameworks have their pros and cons, which I list here below (This is my personal view, of course…):

Therefore, is there any ‘one single perfect solution’?

As a conclusion, I will only speak about myself…

I have never used Redux so far in any of my projects and I have never had the feeling that I missed anything. The same applies to ScopedModel…

Several months ago, I started up working with BLoC and I use this notion everywhere for almost everything, it is so convenient. It really made my code much cleaner, easier to test and much more structured and re-usable.

I hope this article has given you some additional insights…

Stay tuned for new articles, soon and meanwhile, let me wish you a happy coding!